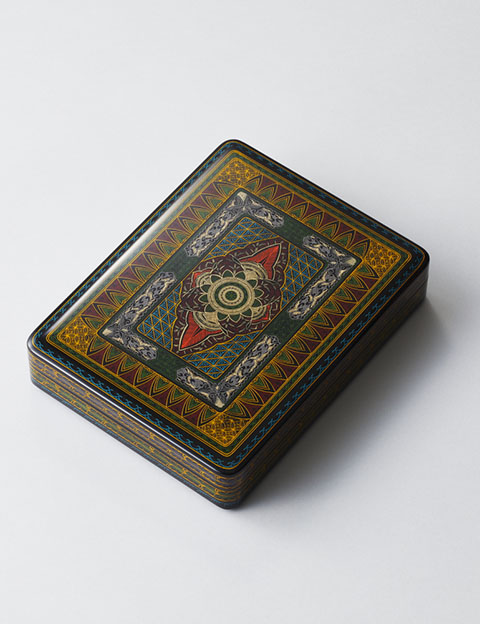 Kagawa lacquerware was established at the end of the Edo era (1600-1868) by the renowned lacquerer Tamakaji Zokoku, who used methods that combined traditional Japanese techniques with techniques from Thailand and China, including kinma and zonsei.
These locally developed techniques have been handed down over the years, leading to the creation of many characteristic pieces, which are still produced today around Takamatsu. The area is the country's top lacquerware producer in terms of variety, producing everything from tables to display shelves to trays, coasters and candy bowls.

The production of Kagawa lacquerware involves five techniques, namely, kinma, goto-nuri, zonsei, choshitsu and zokoku-nuri. Regardless of technique, the tasteful character and sense of quality only increase with use and the passage of time, which aid in the development of this style’s distinctive coloring.

Typical techniques involved in the production of Kagawa lacquerware include kinma, goto-nuri, zosei, choshitsu and zokoku-nuri. These techniques contribute to the distinctive taste and refinement of the product, which increase with many years of use. Interest in this lacquerware continues to grow, as evidenced by the increasing number of orders from all over the country.

The kinma technique, which is said to be named after a Thai plant, is the most representative of the Kagawa lacquerware techinques. It involves applying several layers of lacquer, then engraving patterns and inlaying color lacquer into the engraved areas. The process of engraving and inlaying is repeated for each layer of vermilion and yellow lacquer, and when competed, the surface is polished to a smooth finish.