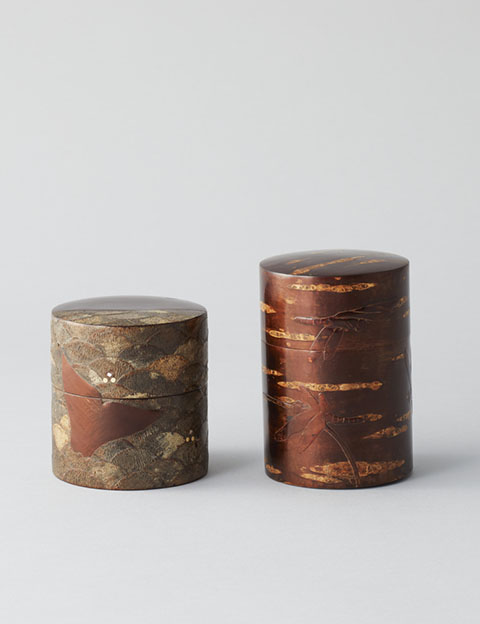 It is thought that Kaba Zaiku dates back to the end of the 18th century, when the techniques were passed on to the people in Kakunodate by the Satake-Kita family of the Ani district in northern Akita Prefecture.
The production of cherry-bark goods was given the patronage of the feudal lord to which the Satake-Kita family was attached and was taken up by lower-ranking samurai, initially as a part-time occupation. Then, when they lost their warrior status at the beginning of the Meiji era (1868-1912), this work became their main source of income and they started producing the prototypes of today's cherry bark goods.

Made from the bark of twelve varities of wild cherry, including amekawa, chirashikawa and hibikawa, this work is found nowhere else in Japan. The choice of bark depends on the item being produced. The natural variations in the bark mean that no two pieces are the same. Nearly always applied to a wooden base, various different articles can be made using this appealing material, but perhaps its most celebrated use is the production of tea caddies.

Kaba Zaiku products, made from the bark of Yamazakura cherry trees, are unique in Japan. More than a dozen varieties of bark, including amekawa and hibikawa, are used to produce Kaba Zaiku goods, each chosen in accordance with the design. Thanks to their hand-crafted process, no two products are alike.

First, the bark of the Yamazakura cherry tree is peeled. Then, using only the bark and decorations on its surface, countless layers are made. Finally, the shape is carved and the product is finished by polishing.