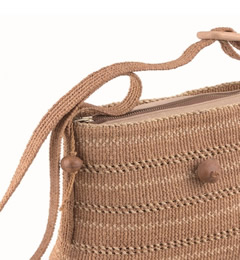 Fragments of simple rope and baskets were discovered at the Arayashiki archeological dig in the town of Mishima, Fukushima Prefecture, proving that the skills and techniques needed for weaving and twisting rope existed in the area as far back as the Jomon era (ca. 10,000-300 BCE). An ancient local farming chronicle mentions that baskets were being made from vegetable and other plant material in the Aizu region.
Another document records that items, including rain-capes, were made in the vicinity of present-day Mishima, using a type of wild sedge grass called hiroro. Still another historical chronicle states that shallow baskets and kitchen strainers were made from fine strands of matatabi vine and that yama-budo vine bark was used to make a particular kind of basket. Taken together, these documents suggest that the production of baskets and other everyday items from grass and vines has a very long history in the area, and indeed these very same traditions are being continued to this day.

During the late 1960s, as the average age of the local population increased, the number of people weaving baskets and other items decreased. It was therefore decided that to preserve these craft skills and techniques, which had been handed down from one generation to the next for hundreds of years, an effort would be made to promote and further develop the craft. This was particularly important because the craft is so closely connected with the natural environment and involves the production of finely crafted everyday items. To this end, instruction is now being given in the weaving and twisting techniques, a quality control system has been established, and a campaign has been implemented to promote the use of craft items in daily life. As a result, the number of individuals involved in the craft has increased and items ranging from handbags to baskets and strainers are being produced.

The materials for this craft, including hiroro, yama-budo and matatabi, can be found in the local mountains. Baskets and bags are weaved when snow is on the ground in the region.

Production is centered in the town of Mishima and a particular feature of this craft is that only durable natural materials are used for these hand-woven products.

Hiroro work involves twisting a very fine cord, which can then be fashioned into a variety of bags. A feature of this work is its fine lace-like weaving, which has a natural simplicity and particular delicacy.

Yama-budo bark is collected in June, when the chestnut trees are in bloom. It is woven in different ways depending on what is being made, which is most often handbags, clutch bags and candy baskets.

Matatabi work is performed using thick, mature vines measuring one to three meters in length. It is used primarily for kitchen items because it does not absorb water and is pliable and soft to the touch when soaked in water. A number of different weaving techniques are used depending on the article being made.

Oku-Aizu woven goods are knitted from plants, including hiroro sedge grass, matatabi silver vine and mountain grape wood, that are gathered in the Oku-Aizu region of Fukushima Prefecture. The pieces are traditional everyday items, including baskets and colanders that are knitted by hand during the deep winters of the mountainous region. Currently, the town of Mishima, Fukushima Prefecture is the primary center of production. Using hiroro, matatabi and yama-budo wood, local artisans produce a wide variety of products, including tote baskets, hand baskets, shoulder baskets as well as confectionery and cooking containers. In addition to their hand-woven charm, a key characteristic of Oku-Aizu woven baskets is the rustic durability that comes from the natural materials used to make them.

Hiroro crafts: Hiroro sedge grass is first entwined into cords, which are woven into various products, including tote baskets, hand baskets and shoulder baskets. The baskets are finely woven to produce a lace-like finish, giving hiroro products a delicate style despite their rustic material.
Yama-budo crafts: The vines are gathered in June, when the chestnut flowers are in bloom. By using different weaving techniques, a variety of crafts, including tote baskets, hand baskets and confectionery containers, can be made from the strong Yama-budo bark.
Matatabi silver vine crafts: A single vine that has matured to a length of one to three meters is used primarily to make cooking utensils. Matatabi baskets drain well and remain soft and flexible, thus preventing injuries to the hand. Different weaving techniques are used according to the design of each product.