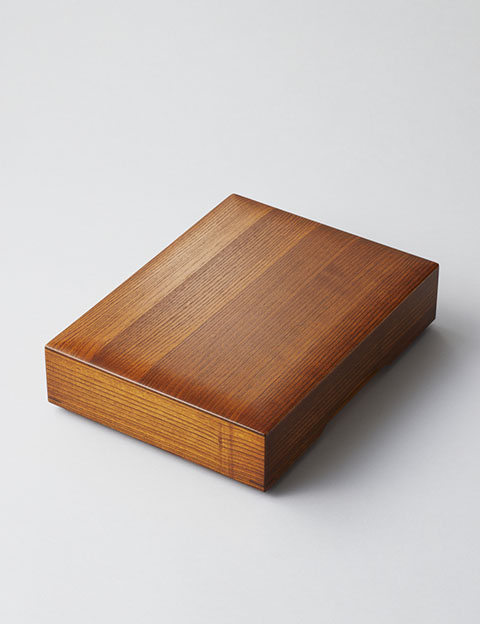 Skilled individuals were encouraged to live and work in Edo (Tokyo) by the Shogunate from the very beginning of the Edo era (1600-1868), leading to the establishment of craft industries, including carpentry, metalworking and dyeing, in the districts of Kanda and Nihonbashi.
The emergence of a consumer society in the middle of the Edo era led to further specialization among carpenters, who produced bentwood goods, fine screens and doors as well as religious and palace architecture. Cabinet makers and joiners also appeared at this time and remain active to this day.

While fine cabinetry and joinery in Kyoto developed to fulfill the needs both of the Imperial court and for tea ceremony items, Edo-style joinery developed to fulfill the needs of the warriors, merchants and kabuki actors who resided in Edo. Edo joinery is characterized by its sturdy construction and simple form, which eschews unnecessary ornamentation and maximizes the beauty of the woodgrain. Perhaps the most highly sought after of all the woods used is from the shimakuwa mulberry trees on the island of Mikurajima.

While Kyoto joinery was used to produce items for the royal family and for tea ceremonies, Edo joinery was used to produce items for samurai families, merchants and kabuki actors. The craft expresses the essence of the Edo era through its lack of decoration, simple rugged design and exhibition of the natural beauty of the woodgrain. The wood of mulberry trees from the island of Mikurajima are considered the finest building material.

Chisels and knives are used to carve interlocking finger and dovetail joints into the timber and boards, which are then joined together without the use of nails. Additionally, small handmade wood planes are used to produce a variety of finishes and patterns along the edges of the boards. While the variety of techniques cannot be seen from the outside, their use results in a finished product that can be used for decades.