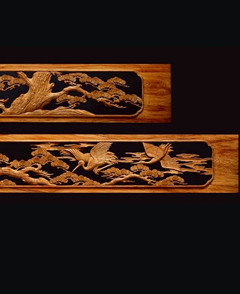 The origins of Osaka transoms date back to the beginning of the 17th century and the traditional woodworking skills that can be seen at Hijiri Shrine and Shiteno-ji temple in Osaka. During the 18th century, transoms were gradually introduced into merchant's houses, not only for ventilation and lighting but also as a decorative element that raised the quality of the interior space, especially in rooms where guests would be received.

There are many types of transom. One type involves a bold carving technique that brings out the quality of the underlying Japanese cedar woodgrain. Another type strikes a wonderful balance between the paulownia woodgrain and the transom design. Other types mainly comprise lines, repetitive elements or grills. Still others are little more than a frame, but all transoms have a decorative function. Despite a decrease in the number of traditional houses being built, artisans also produce items, including screens and picture frames, that are important to the interior of modern Japanese homes.

Osaka transoms come in a variety of styles, including chokoku-ranma, the carvings of which perfectly highlight the underlying Japanese cedar woodgrain, sukashibori-ranma, in which the bark of the paulownia wood is blended into the work, osa, which is adorned with patterns, as well as kumiko-ranma and nuki-ranma. No matter the style, Osaka transoms combine traditional aesthetics with air-exchange functionality, making them suitable for any Japanese house.

Osaka transoms are made from cedar, paulownia and cypress woods. First, the wood is naturally dried and then cut to the required size. If sketches of the design are needed, they are drawn directly on the surface with a brush. Following the sketch, the surface is carved using a three-dimensional approach. Finally, the item is polished using insect wax.