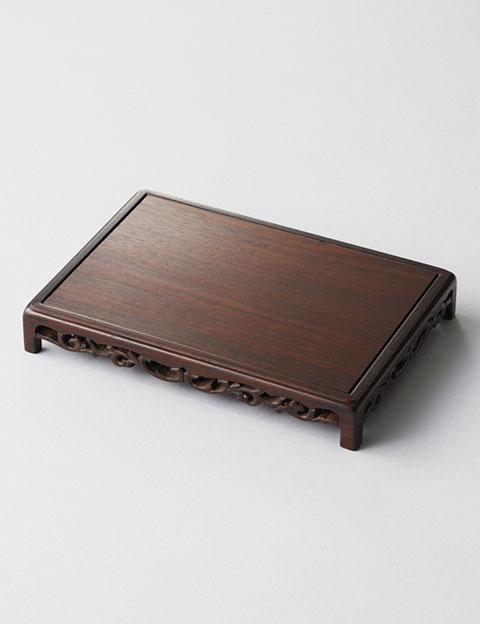 Fine rarewood cabinetry was introduced to Japan by envoys who visited Tang-dynasty China; hence the name of these woods is “woods of Tang” (karaki) in Japanese. During the Edo era (1600-1868), when foreign entanglements were mostly eschewed, rarewoods entered the country via the port of Nagasaki and were subsequently distributed by a medicine wholesaler in Osaka.
Today, the same rarewoods and traditional techniques are used to produce not only traditional articles but also items suitable for with modern life, including cabinets, tables and boxes. These fine pieces of furniture, which are made of sandalwood and ebony among others, are of long-lasting quality.

Comprising mainly tables and desks, examples of Osaka rarewood products include parlor desks and flower stands as well as decorative shelves and tea shelves made from imported woods, including rosewood and ebony, that have a reputation for sturdiness and create a relaxing atmosphere.

Imported rosewood, ebony and the like are dried outdoors for 4 to 5 years and are then processed almost entirely by hand. Each part is joined using a variety of kumite techniques, which do not require nails or screws. The product is finished by wiping with purified raw lacquer followed by powder-polishing.