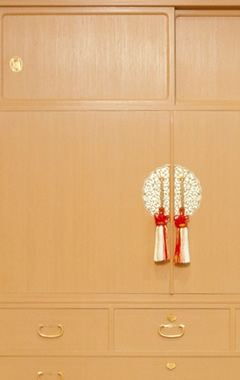 At the end of the Edo era (1600-1868), the tower of Wakayama Castle was destroyed by lightning and much of the furniture was burnt to ashes in the ensuing fire. Records show that when the castle tower was rebuilt four years later, the chests and other cabinets lost in the fire were remade. In addition, chests dating back to the mid-19th century have been discovered in homes all over Wakayama Prefecture.

Paulownia wood is highly suited to the production of chests, wardrobes and cupboards because it both soft and light, with a pale silver–beige coloring and an elegant, beautiful grain. Kishu chests are also known for their meticulous workmanship and jointing, which is called “arihozo.”

Paulownia wood has an elegant pale yellow bark that makes it an ideal material for beautiful, soft, light furniture, including dressers and cabinets. Wakayama is renowned for its fine and precise handicrafts produced using techniques such as kumite joining.

After the impurities have been removed and the paulownia wood has been allowed to dry naturally, pieces of the required width are peeled off. The boards are planed and assembled into boxes using dovetail joints, a technique passed down since ancient times. Then, when the body, drawers and door are assembled, each part is machine-finished. Finally, all the surfaces are finished using techniques that bring out the beauty of the wood, including dyeing with a solution made from the yashabushi (alnus firma) natural dye and polishing with wax.