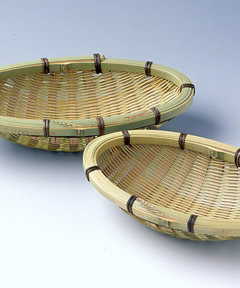 Katsuyama bamboo basketry started at the beginning of the 19th century but its center of production was established at the end of the Edo era (1600-1868), when baskets known as harisouke were first made. These baskets are thought to be associated with souke and meshizouke baskets, which are still made today and represent the majority of bamboo basket production.
These simple baskets with their undeniable presence have earned a reputation for durability and ease-of-use.

Due to its unique qualities, bamboo can be used to make a wide variety of everyday items suitable for both Japanese and Western homes. In addition to traditional baskets, items produced today include bread baskets, baskets for flowers and decorative baskets.

Katsuyama bamboo baskets are uniform products crafted for practical uses. These products possess impressive qualities, despite their rustic appearance, and have a reputation for sturdiness and ease-of-use. Bamboo’s unique qualities make it suitable for use in a wide range of items for both Japanese and Western homes.

Katsuyama bamboo baskets are made with madake bamboo. This bamboo is used as-is, without being bleached or stripped of its bark. The production process can be roughly divided into a preparation stage and a weaving/finishing stage. In the preparation stage, the required dimensions are calculated according to product type and the size of the individual parts. Then, dirt is rubbed off with wet straw and traditional shaving and splitting techniques are applied, depending on the final use of the pieces. In the weaving/finishing stage, the products are finished using various techniques, including wheel-making and mat plaiting, depending on the specific product.