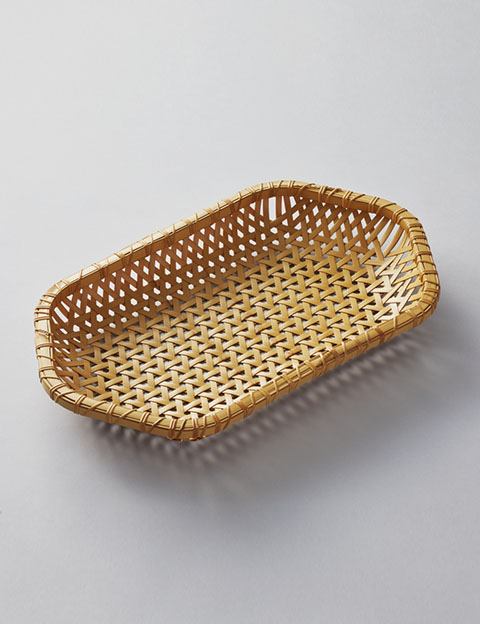 Beppu bamboo basketry dates back to the production of bamboo baskets for sale by traveling peddlers during the Muromachi era (1392-1573).
During the Edo era (1600-1868), Beppu’s hot springs became well-known throughout the country and attracted many visitors. Concurrently, bamboo items, including baskets for washing rice, holding cooked rice and sieving miso, were made to meet the demand from these visitors, who began taking these household items home with them. Over time, this simple craft developed into a local craft industry. A training facility was established in Beppu in 1903 and graduated a large number of fine artists and technicians who built the foundation of Beppu bamboo basketry as it is today.

The baskets are made mainly of madake bamboo that grows in Oita prefecture and is well suited to basketry. Other varieties used include hachiku, kurochiku, gomadake and medake, and are selected according to the article being made. Using eight fundamental techniques, a wide range of goods can be produced that take advantage of bamboo’s inherent beauty. Today, all manner of household goods are produced in large quantities, ranging from functional everyday baskets to purely decorative pieces of art.

Beppu bamboo baskets are made mainly from P. bambusoides, a species of bamboo that grows wild in Oita prefecture and is suitable for weaving. Other varieties, including henon, medake, gomadake and black bamboo, are used for different purposes. Using eight basic techniques, a wide range of products can be produced that preserve the natural beauty of bamboo.

The bamboo is first bleached, dried, split and stripped to the size needed for the product. More than 400 weaving patterns are used to create a wide variety of products.