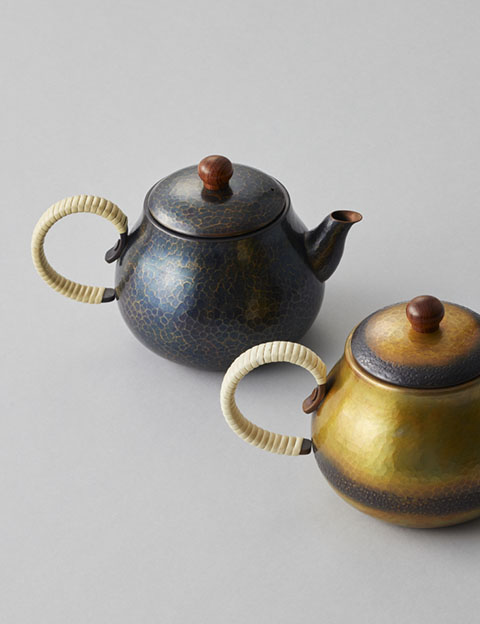 Beaten copper work began in the Tsubame area during the middle of the Edo era (1600-1868) when specialists from Sendai in what is today Miyagi Prefecture arrived in the area and passed on their skills. Kettles were some of the first items made using the locally mined copper.
During the latter part of the 19th century, an active exchange of ideas and techniques took place with other areas and Tsubame beaten copperware became an established art craft involving the technique of chasing. Subsequently this led to the development of a metal processing industry in the city.

In this craft, a single sheet of copper is transformed into a three-dimensional object, such as a kettle, simply by beating it with a hammer. Particular skill is required to form the spout and the body of the kettle from the same sheet. Other items produced today include pots, pans, jugs, flasks, cups and even stationery accessories.

Tsubame beaten copperware involves hammering a three-dimensional shape out of a single flat sheet of copper. Even items with a spout, including tea-kettles, are hammered from the same sheet of copper, revealing the depth and mastery of the craft.

The copper sheet is first laid over an iron planishing stake and gradually shaped first into a cylinder and then into its final form by hammering it at different angles against the stake. Because the hammering process hardens the copper, it must be repeatedly heated in fire to keep it soft enough for molding. These steps are repeated until the final shape is achieved. The piece is then decorated with engraved or hammered patterns, before finally being boiled in a solution of copper verdigris and copper sulfate to give the copperware its unique color.