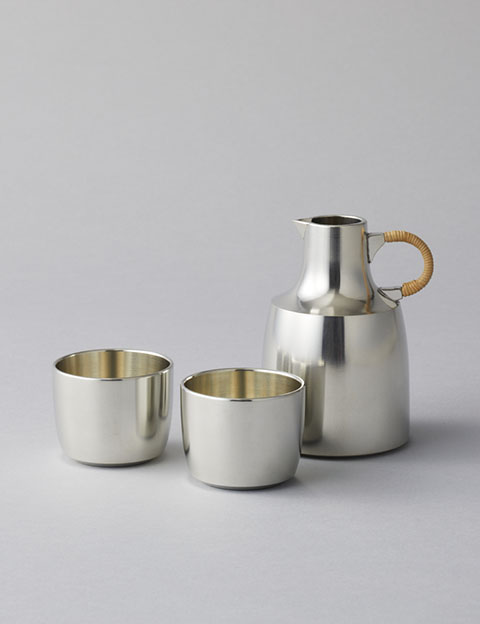 Pewterware was first introduced to Japan some 1,300 years ago by envoys from China. Later, during the early part of the Kamakura era (1185-1333), the Zen monk Eisai visited Song-dynasty China and returned with a maker of tea urns. He passed on his skills to local artisans, leading to the establishment of this craft in Japan. However, it was not until the 18th century that a production center was established in Osaka.

Pewter is a very stable metal. It is an ideal material for sake flasks because it does not affect the delicate flavors of the drink. In contrast, the taste of water is actually improved by the ionic action of the metal. It is also particularly suitable for storing tea, which would deteriorate in anything less than an air-tight container due to the high temperatures and humidity of Japan’s summers.

The main component of pewter is tin, which is a very stable metal. It is perfectly suited for drinking cups because the ionic effect of the metal has strong water-purifying properties but does not affect even the subtlest of flavors. Due to its airtight preservative properties, even at high temperatures and humidity, it is an ideal material for tea canisters.

Because tin’s peculiar softness makes it difficult to process by machine, most steps must be performed by hand. The manufacturing process can be roughly divided into casting and polishing stages. After the rough-surfaced casting is mounted on a turning lathe, the surface is sanded with a special plane to smooth it. Then, it is polished to bring out the gloss.