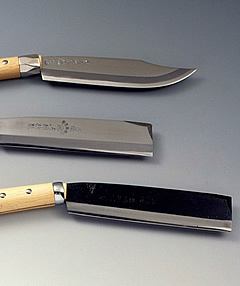 Records indicate that around 400 smiths were active in Tosa at the end of the 16th century. While their primary work was making samurai swords, they also appear to have made sickles and knives for local farmers. Later, with the promotion of forestry and the development of new cropland in the area, more and more bladed tools for agriculture and forestry were produced, and the area soon became production center for forged goods.

Tosa forged blades are characterized by the use of a technique called “free forging.” Items produced today include a wide variety of knives, hatchets, sickles, axes and saws, each of which is made individually.

Tosa’s skilled artisans can create blades of any specification, accepting orders from across the country that consist of little more than a description of the desired size and shape. Their method, known as free forging (jiyu-tanzo), has survived to the present-day because it has allowed them to produce a wide variety items that satisfy the particular demands of each and every customer. This explains why Tosa produces such a wide range of cutlery.

First, iron or steel is heated in a furnace and hammered into the desired shape. Then, the edge is sharpened. For axes and hatchets, a special method called nuki-bitsu is used in which the metal is perforated by a chisel.