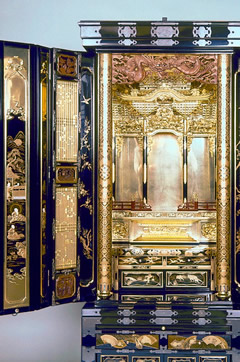 The production of Kanazawa household Buddhist altars dates back to the 17th century when the Shin Buddhist priest Rennyo-shonin visited the Hokuriku region and converted a large number of people there.
Meanwhile, a number of skilled craftsmen were already operating in the area, having trained at workshops set up by generations of feudal lords belonging to the Kaga clan. In adherence with the religious policies of the Tokugawa Shogunate, the Kaga clan encouraged all households to have an altar. The Kanazawa style of household Buddhist altar is characterized by its impressive spirit and beautiful gold leaf supplemented by maki-e gold and silver lacquering, which is a reflection of the rich Kaga culture.

Given the wide popularity of Shin Buddhist teachings in the area, the demand for household altars here was greater than in other areas. The use of gold leaf became a feature of these altars, along with the and the silver and gold maki-e gold and silver lacquering and engraving techniques perfected in the Kaga clan workshops.

In Kaga, which was once known as the Shinshu Kingdom because the Shin school of Buddhism thrived there, there has always been a high demand of Buddhist household altars compared with other regions. As the Crafts produced in Kaga were long characterized by their use of sculpting and maki-e lacquer techniques. These techniques were later applied to the production of household altars and led to the lavish use of gold leaf, which has become a prominent feature.

Manufacturing stages include preparing the wooden base, sculpting, painting, affixing metal ornaments, applying gold-sprinkled lacquer and embossing with gold. Types of wood used include mainly ginkgo, cypress, pine and cedar, whereas ivory and coral are used for the sculptures. A special polishing technique called honkin-tokidashi-migaki is used to give the gold-sprinkled lacquer a vivid finish. The use of the kirikane technique, which involves the application of pieces of gold and silver leaf, gives the altars an air of luxury.