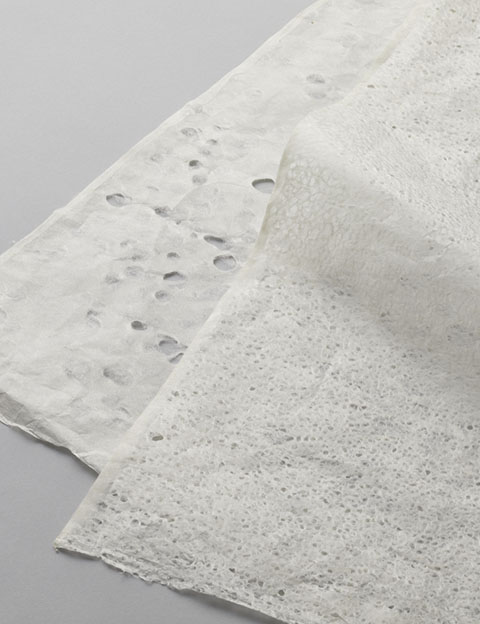 Mino washi paper dates back at least to the Nara era (710-794), as evidenced by records at the Shosoin Repository indicating its used in a census during the 8th century. In the Muromachi era (1392-1573), the locally influential Toki Nariyori opened the Rokusaiichi paper market and Mino washi paper was shipped to Kyoto, Osaka and Ise, making it among the best-known paper of its time.

Like much of Japan's handmade paper, Mino washi is produced using the nagashi-zuki tossing method, which “knits” all the fibers together, leaving no evidence of the production process on the surface. Even when the finished paper is thin, it is well-formed and as strong as cloth, making it suitable for many applications, especially shoji screens and documents that need to be preserved. Mino washi paper is also used for calligraphy, painting and making gold leaf.

Mino washi paper is made using the nagashi-zuki technique, which produces an even paper surface with well-knit fibers. The finished product is beautiful and even the thinnest varieties are as strong as cloth. It is ideal for shoji screens, document preservation and more.

The paper is produced using one of two approaches. In the tame-zuki technique, the paper mixture is scooped up in a mat-lined frame and left to drain. In the nagashi-zuki technique, the paper mixture is not left to drain on the mat, but instead is shaken horizontally and vertically. Adjustments are made by the craftsman as necessary, with the mixture scooped up several times to create a smooth, even paper.