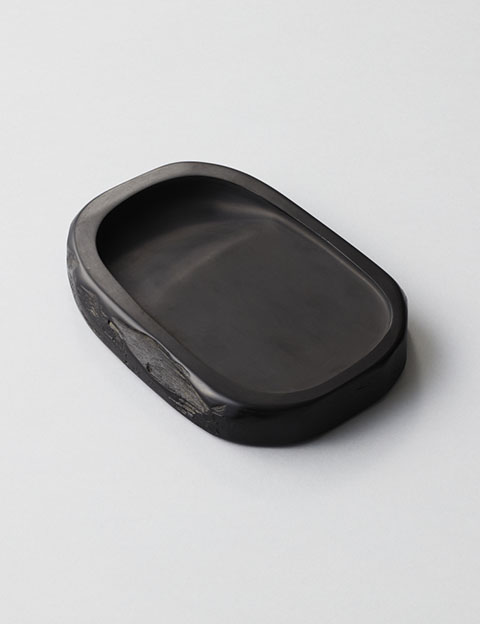 Ogatsu inkstones date back to the Muromachi era (1392-1573). At the beginning of the 17th century, two inkstones were presented to the military commander Date Masamune, who was hunting deer on an island off the coast of the Ojika Peninsula. He praised the inkstones for their high quality, and his son Tadamune, who recognized the skill with which they were fashioned, soon ordered craftsmen to make inkstones for the clan. The mine from which the stone was sourced was then placed under exclusive clan control and no one else was allowed to mine there.

The most important part of an inkstone is the bed (houbou) on which an inkstick is rubbed with a little water. It is the texture and hardness of this surface that characterizes Ogatsu inkstones. The raw material is a type of slate that is either black or deep indigo and has a rich luster and smooth surface. Some are highly fashioned, whereas others are almost as they were when they were mined.

The most important part of an inkstone is the bed of the stone, which provides the appropriate amount of friction for grinding the inkstone. Ogatsu inkstones are renowned for the perfect balance of roughness, fineness, hardness and even softness found in their bed. The stones are either black or dark indigo, and have a rich, glossy luster and a smooth finish.

Ogatsu inkstones have been renowned since the Muromachi era. The stones are crafted by hand, using painstaking traditional methods dating back over 600 years. Each inkstone is produced from the diligence and passion of a single artisan.