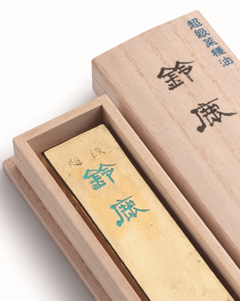 The making of inksticks in Suzuka is said to have begun at the end of the 8th century, when soot was first obtained by burning pine wood obtained from the nearby mountains. Animal glue was added to the soot, which was dried and used to make ink.
During the Edo era (1600-1868), when feudal lords were assigned family crests and schools for young children were established at temples, the demand for ink increased. Under the protection of the clan, the production of inksticks rose.

Suzuka ink is used in works of art because of its high quality, good appearance and sense of depth. It also provides a favorable balance between how the ink seeps into the paper and how it maintains a solid line.

Suzuka ink is used to produce works of art because of its high-quality depth and good balance of clear lines and bleed. These qualities are the result of the beneficial geography and climate of the production region.

An animal glue called nikawa is melted and kneaded with soot to produce ink of high quality. Next, the ink is dried, polished using a bivalve shell, and painted with a decorative design.