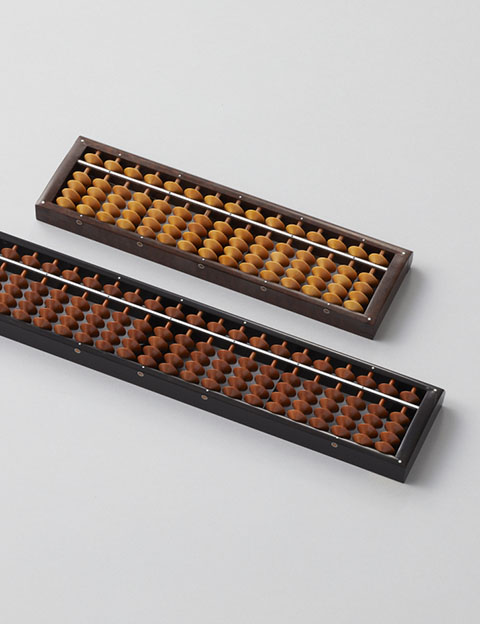 The abacus was introduced to Japan from China through the port of Nagasaki toward the end of the Muromachi era (1392-1573) and eventually reached Otsu. Subsequently, during the Momoyama era (1573-1600), when Toyotomi Hideyoshi laid siege to Miki castle, many of the townspeople fled to nearby Otsu, where some learned how to make abacuses. When they later returned to their homes, they began making what became the Banshu abacus.
Local production peaked in 1960, when 3.6 million abacuses were made. Demand has gradually fallen since then due to the appearance of the electronic calculator. However, due to its ability help students visualize calculations, the abacus remains an important teaching tool in many schools. Some also believe that using an abacus can stimulate the mind and prevent senile dementia.

The frame is made of ebony or other dense hardwoods, whereas boxwood and birch are used to make the beads. Banshu abacuses are characterized by their ease of use, but it is the fineness and delicacy of their construction that makes them works of art.

The beads are made of birch or boxwood and the frame of ebony or other hardwoods. Assembled using traditional techniques, including the “fish scale” technique (urokosai), and then beautifully polished, Banshu abacuses are simple to use and also valuable works of art.

First, the wood is carefully selected and dried. The beads, the axis shaft and the frame are carved and then finished according to the material. Next, the middle crosspiece, the back plate and the upper, lower, left and right parts of the frame are fashioned. Once the beads are inserted onto the shaft, any warping is corrected and wood filler is used to set everything in place. Finally, the assembled piece is polished and glazed.