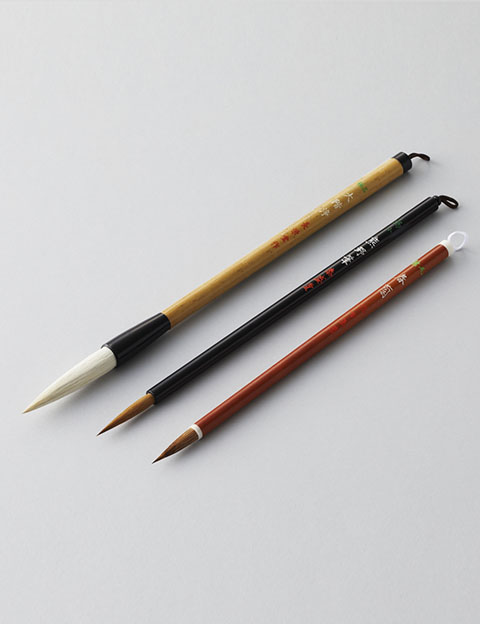 During the Edo era (1600-1868), farmers in Kumano who could not make a living from agriculture alone traveled to areas in what are now Wakayama and Nara Prefectures to look for work. Upon returning home, they sold writing brushes and ink they had acquired while away, and this eventually led to the making of brushes in Kumano.
Toward the end of the Edo era, brushes were being produced at a workshop set up by the Asano family, who ruled the Hiroshima domain. The skills and techniques they developed were passed down through the generations, establishing the Kumano brush-making craft as it is known today.

Items produced today include brushes for schools, calligraphy, painting and even makeup.

Calligraphy brushes are produced for everyone from school children and general users to calligraphy experts, for whom brushes can be custom-made to individual specifications.

First, hairs from goats, horses, deer, tanuki, weasels and cats are carefully selected to ensure the quality of the final product. The hair is rubbed with ash to remove any oil, then cut to the required length, mixed together and bundled into a core. More hairs are wrapped around the core and tied at the base to complete the neck, which is glued onto the shaft. Finally, an inscription is engraved on the handle.