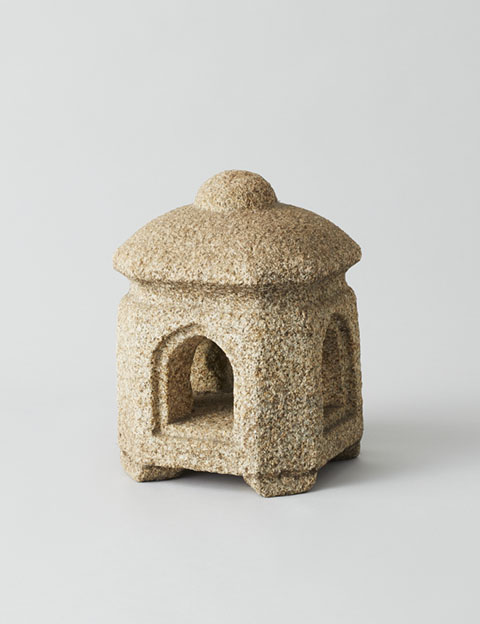 Although humanity’s use of stone dates back to the Stone Age, it was not until the end of the Nara era (710-794), when Buddhism was introduced to Japan, that stone became more than a utilitarian material.
Gradually, as the art of stone carving developed, works of cultural value began to appear. Blessed with high-quality granite from nearby Mt. Hiei, Kyoto stone carving has been sustained by Kyoto’s position as the center of Japanese culture for over a thousand years. Stone-carving techniques not found elsewhere in Japan have been refined and passed down from generation to generation.

A stonemason carries out all the work for each piece according to its form and function. Nearly all types of Kyoto stone carvings are for use in traditional Japanese gardens. The stone lantern, in particular, has been a fixture of traditional gardens since the Momoyama era (1568-1600). Other items produced today include tubs, pots and sculptures.

Kyoto stone carvings, mostly used as garden decorations, are handmade by a single stonemason who handles each step of the process. A wide variety of items are produced, but stone lanterns are the most popular, having become an essential element of Japanese gardens during the Momoyama era along with the rise in popularity of the tea ceremony.

While varying in form and function, Kyoto’s stone lanterns, pagodas, vases and millstones are produced according to the same general process, which consists of raw-stone processing, molding, sculpting and finishing. The traditional techniques used in each stage have been handed down from generation to generation. Outdoor stone decorations require no special care but may chip or break if struck hard enough. An important consideration when installing a stone lantern is to devise a way of harmonizing it with the surrounding garden environment.