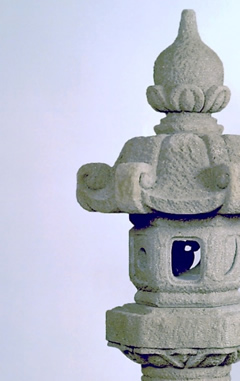 Izumo stone lanterns have been made for hundreds of years using locally mined sandstone formed from volcanic ash. During the Edo era (1600-1868), the local lord, Matsudaira Naomasa, recognized the value of the sandstone and placed it under a monopoly, controlling its use for both stone lanterns and architectural purposes. Since the end of the 19th century, stonework for both home and garden has been considered an artform in Japan.

The finely textured stone enables the production of pieces with soft, gentle curves. Lanterns and other outdoor decorations made of sandstone soon blend into their surroundings as moss begins to grown on their pitted surfaces. The stone is durable and responds well to extreme temperatures, as evidenced by a piece dating from the early 17th century.

Because Kyoto sandstone is made of fine, tightly packed grains, it can be used to produce soft, graceful elegant lanterns. In addition to having an attractive natural color, the stone quickly gathers moss, giving it an antique patina that allows it to blend in with the natural environment. The material is highly resistant to extreme temperatures and weathers very well, as evidenced by the many works from the Edo era that remain today.

The stone is carved using various tools, including hatchets and pickaxes, to create a balance among the rotundities, slopes and ridgelines. Decorations and engravings are chiseled to create a relief effect. Finally, special tools are used to give the surface a smooth, granular, sharkskin-like or rough finish.