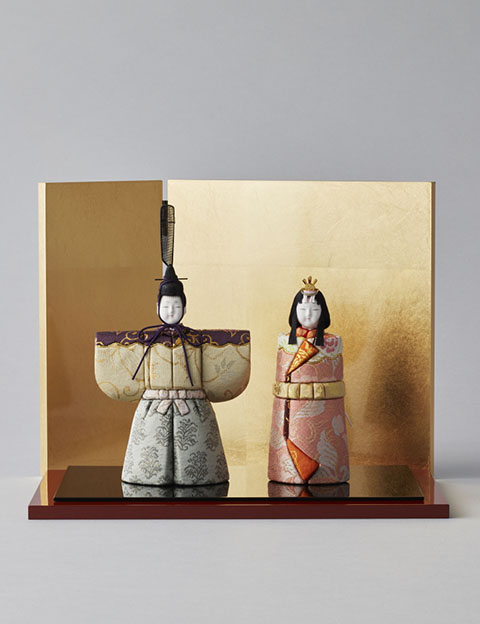 In the middle of the Edo era (1600-1868), a priest named Takahashi Tadashige is said to have fashioned a small wooden doll from scraps of willow left over from boxes used at a festival at Kamigamo Shrine in Kyoto. Using remnants of fabric from his robe, he dressed the doll by inserting the ends of the fabric into the wooden torso.
Originally named Kamigamo dolls after the place they were first made, they were later called kimekomi dolls because of the way the fabric was inserted into slits in the wood, and the name stuck. Subsequently, the craft was established in Edo (Tokyo), where they are still made today.

Edo kimekomi dolls are made in a mold, using a mixture of paulownia sawdust and a wheat-starch glue. After hardening, grooves are chiseled into the torso and the unfinished ends of the fabric are inserted to dress the dolls. A number of highly appealing dolls are produced today, including representations of well-known Kabuki characters and traditional figures as well as dolls for the Doll Festival (Hina Masturi) in March and Children's Day in May.

Edo kimekomi dolls are made in a mold using a mixture of paulownia saw dust and wheat-starch glue. Once hardened, grooves are chiseled into the torso and the ends of the fabric are inserted to dress the dolls.

Great skill and experience is needed to create the face, which is said to determine the quality of the doll. First, the paulownia sawdust and wheat-starch glue mixture is pressed in a mold and dried to produce the head. Then, multiple layers of paint are applied, after which the eyes, nose and mouth are carved and painted again. Next, the entire piece is polished to produce the soft luster of natural skin, before the eyes and eyebrows are drawn with a fine brush, blush is brushed on the cheeks and lipstick is painted on the lips. Finally, the hair is placed on the doll and then combed and set.