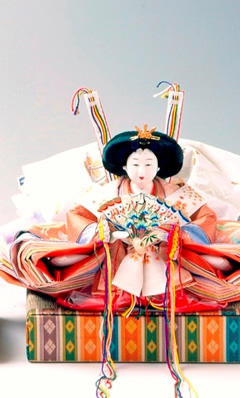 The roots of Suruga dolls can be traced back to simple clay dolls known as neri-tenjin, which were named for Sugawara Michizane, a Heian-era (794-1185) scholar respected as a god of learning. However, the craft began in earnest much later, when a local man named Aono Kasaku assembled a group craftsmen skilled in making things from clay to produce dolls. Examples dating back to 1853 still exist today.
By the end of the Edo era (1600-1868), more elaborately dressed dolls known as ishogi-tenjin were being produced.

The individuality of each doll maker is reflected in the construction of the body as well as the color and pattern of the clothing. Such idiosyncrasies are even more apparent in the posture of the dolls. It is said that even if a hundred dolls were lined up, an expert would be able to discern at a glance the maker of each doll. Today, a wide range of dolls is produced, including those for the Doll Festival, figures from the past as well as more contemporary forms.

The personality of the artisan is reflected in all aspects of the doll’s creation, from the first step of constructing the torso, to choosing the patterns and colors of the fabric for the clothing, to the final step of bending the arms. It is said that the artist can be identified just by looking at the way the arms are bent.

First, the torso is made by tightly wrapping rice straw. Then, the arms and legs are made by wrapping wire with wood wool. The arms and legs are attached to the body and fitted with clothing, and the arms are bent into place.
Neri-tenjin dolls are made using toso, which is a mixture of paulownia sawdust and wheat gluten that is pressed in a mold and dried. Then, the hair and headpiece are attached to the head, the face is painted on, the doll is dressed, smaller props are added, the platform is made, and the doll is placed on the platform.