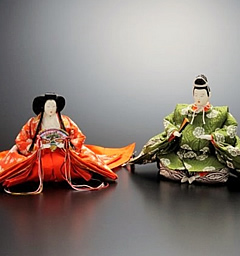 It is thought that dolls were first made with the belief that any evil that might befall a child would afflict the doll instead. Over time, these dolls evolved into the prototype for the hina dolls that children of imperial and noble families played with during the Heian era (794-1185).
The form of these dolls was not perfected, however, until sometime during the Edo era (1600-1868). Gosho, isho and ichimatsu dolls, all of which are intended for decoration rather than play, appeared around the same time and are still being produced today.

Because of its long history with lacquer work, textiles and Buddhist altar fittings, Kyoto is an ideal place for making dolls. The work is divided among artisans who specialize in making the head or limbs, attaching the hair, or dressing the dolls. The result is a doll of exceptional quality.

Given its association with crafts related to Buddhist altar fittings, natural fibers, lacquerware and more, Kyoto is the perfect environment for producing traditional dolls. Different specialist craftsmen make the head or limbs, attach the hair or make the clothing. The high-quality work of each specialist results in dolls of incredible sophistication.

The production process is based on a precise division of labor in which each craftsman is specialized in sophisticated techniques that have been handed down from father to son. Materials used are carefully-selected, premium-quality natural materials.