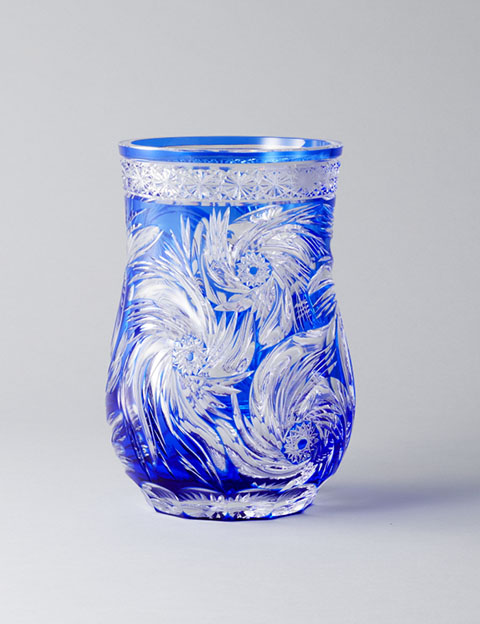 The origins of Edo cut glass date back to 1834 when Kagaya Kyubei, who operated a small glass shop in Edo (Tokyo), copied a piece of English cut glass. It is said that Commodore Matthew Perry, who arrived in Japan toward the end of the Edo era (1600-1868), was amazed when presented with a splendid piece of Kagaya's cut glass.

Subsequently, various Western methods of cutting and sculpting glass were introduced during the late 19th and early 20th centuries under the guidance of experts from England. In fact, many of the glass-cutting techniques introduced at that time are still used today.

During the Edo era, cut glass products were clear, but today mostly colored items are produced to satisfy consumer demand. The distinct lines and patterns and the contrast between clear and colored surfaces are characteristics of Edo glassware. Items produced today include tableware, sake glasses, flower vases, decorative ornaments and stationery items.

Kiriko is the traditional art of cutting decorative patterns into the surface of glass. Images reflective of daily life in Edo, including baskets, chrysanthemum and hemp leaves and geometric shapes, form the basis of traditional designs. The unique style of Edo cut glass is due to the incredible skill used to combine the variety of patterns into a finished piece. Using the suki technique, shapes were originally cut into clear glass. However, a more recent technique called irokise, in which a film of colored glass is applied to the clear glass and then cut, has become mainstream. The key characteristic of irokise pieces is the vivid contrast between clear and colored created by the decorative cuttings.

The process of making Edo Kiriko is divided into four steps. In the waridashi/sumitsuke step, the surface of the glass is marked with lines and dots so the artisan can see where to carve. In the arazuri step, a metal disk is used to make the initial cuts of the design. Depending on the design, sometimes this step may be divided into two or three stages. In the ishikake step, a whetstone is used to complete the design as well as to etch more delicate patterns without any initial cuts. Finally, in the migaki step, the glass is polished to a brilliant finish. The glass must be ground without the aid of a rough sketch on the surface. Only the well-trained eye and the experienced hand of a master artisan with many years of experience can bring these traditional and beautiful patterns to fruition.