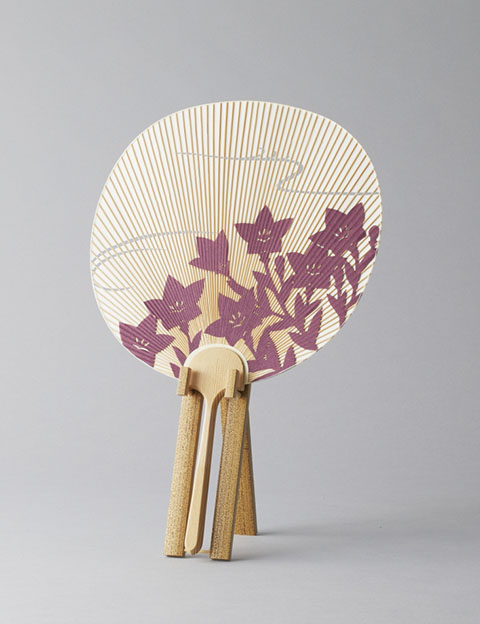 Kyoto Uchiwa Fans can be traced back to the period of Japanese history known as the Northern and Southern Dynasties (1333-92). It is said that round Korean fans were introduced to Japan by Japanese pirates who were raiding the coast of Ming- dynasty China and Korea at the time. These fans eventually found their way to Fukakusa, where aristocrats from Kyoto had their country villas.

However, it was not until the beginning of the Edo era (1600-1868) that these fans took on their distinctive form with its separately attached handle. It seems that this practice began with the gosho uchiwa fans painted for the imperial family by artists of the Tosa and Kano schools. These round fans soon became popular with ordinary people, establishing the form of the Kyoto uchiwa fan as we know it today.

Nurtured by Kyoto’s rich history, culture and climate, the artisans producing uchiwa fans today continue to add something new to this craft with both hand and heart. More than a simple device to keep people cool, Kyoto uchiwa fans are aesthetically pleasing and add a little something extra to daily life.

Though steeped in the city’s rich history and culture, new techniques and designs are always being developed. Far from being mere tools for cooling off, these beautifully crafted objects delight our eyes and enrich our lives.

Kyoto uchiwa fans are produced by splitting high-quality bamboo and arranging the individual strands one by one to form a radial shape. Then, paper decorated using various techniques, including gold leaf, hand drawings and woodblock printing, is stretched on top of the frame. The ribs are inserted into small openings in the paper, which is trimmed at the edges, and finally the handle is attached.