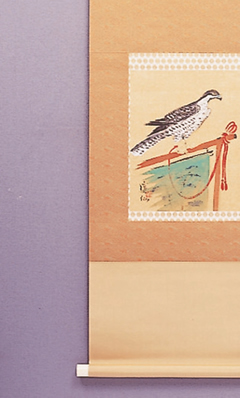 Art mounting dates back to the Heian era (794-1185), when paper used for artwork, calligraphy and Buddhist sutras was strengthened by applying fabric. Later, calligraphy and paintings were backed or edged with paper or fabric for display or protection.
Gradually, the practice spread and was applied to fusuma sliding doors, hanging scrolls and frames, which are used to decorate the alcove (tokonoma) in traditional Japanese reception rooms, as well as folding and single-leaf freestanding screens, which are used on a daily basis in the home as partitions, screens or simply to block drafts.

Sustained by Kyoto's beautiful environment and the refined tastes of its people, the development of art mounting was also fostered by the humid climate of the Kyoto basin. Mounting techniques reflecting the aesthetic taste of tea masters were perfected following the appearance of the tokonoma and the increase in popularity of the tea ceremony from the end of the Muromachi era (1392-1573) on into the Edo era (1600-1868). Items produced today include mainly various kinds of screens as well as mountings for hanging scrolls and hand scrolls.

The art mounting craft developed as a consequence of the humid climate of the Kyoto basin and has been sustained by Kyoto’s beautiful environment together with its inhabitant’s refined tastes. The craft was further influenced by the aesthetic sensibilities of tea masters following the introduction of the tokonoma alcove for displaying flowers and works of art as well as the spread of the tea ceremony from the late Muromachi era into the Edo era.

Ordinary and hanging scrolls are reinforced by gluing sheets of paper to the back of the main paper or fabric surface and further reinforcing the whole set. For fusuma sliding doors, byobu folding screens and tsuitate partitions, inner, middle and outer layers of paper are glued to the frame, and finally the frame is put in place.