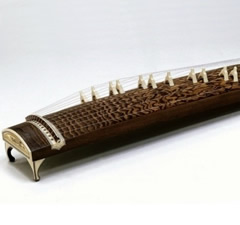 The production of Fukuyama koto is thought to have be at the beginning of the Edo era (1600-1868) when Fukuyama castle was built in what is now Hiroshima Prefecture. Craft industries flourished in castle towns during the Edo era, and with the support of feudal lords, both accompanied and unaccompanied songs became popular in Fukuyama.
In the latter years of the Edo era and continuing through the Meiji era (1868-1912), Fukuyama produced a number of superb koto players. Subsequently, demand for the instrument grew and production quickly followed.

Fukuyama koto are produced using well-seasoned high-quality paulownia wood. The exquisite craftsmanship is evident in the extremely detailed work. The superb tone, the beautiful woodgrain and the splendid decorations are the product of the technical skill and experience of master artisans.

Fukuyama koto are made of the finest paulownia wood, crafted with exquisite care so that even the most minute details shine through. The excellent tone, the beauty of the woodgrain and the elegance of the decorations are born out of the expert hands of experienced craftsmen.

The koto manufacturing process starts with the selection of raw paulownia wood, which is then dried over the course of a year. Then, the wood is gouged, carved and burned to form the shell. Finally, decorations and gold leaf are applied and the metal fittings are mounted and adjusted. Most steps are performed by skilled koto craftsmen working with great care.