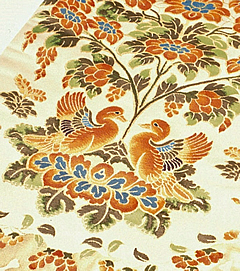 It is said that Kiryu Ori goes back over 1,300 years to when Princess Shirataki, who served in the Imperial Court, went to live in Kiryu after marrying into the Yamada family. From then, she taught the art of sericulture and weaving to the people of the village.
Kiryu textiles became well known throughout the land, after Nitta Yoshisada raised an army at the end of the Kamakura period (1185-1333) and Tokugawa Ieyasu used a white silk flag from Kiryu at the Battle of Sekigahara in 1600. In the first half of the 19th century, with the Shogunate’s patronage, it became possible to produce high quality textiles including kinrandonsu and itonishiki. The skills and techniques associated with these cloths have been handed down to today's weavers.

Many different kinds of cloth are woven under the Kiryu banner today, most of them being yarn-dyed jacquards produced in small quantities but of special value. They are woven into wonderful designs and patterns, mostly for kimono and obi.

The many stylish designs and patterns of Kiryu yarn-dyed jacquard textiles are produced in small quantities and are highly valued.

The main materials are raw silk and silk thread. To prepare, the textile is designed and the jacquard board and the loom are set up. Then, the thread is twisted, dyed and wound onto reels, the weft threads are wound onto shuttles, the warp is set up and the fabric is woven. Omeshi silk is made with threads first twisted with a filature machine. After being woven, the fabric is washed to contract it.