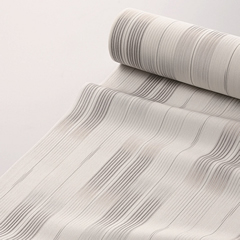 Toward the end of the 19th century, a sample roll of summer-weight kimono cloth was brought back to Tokamachi from Nishijin in Kyoto. Then, work began on adapting an existing local weave called Tokamachi Sukiya to produce something brand new. A great deal of effort was put into developing and improving the ways of tightly twisting up weft threads, resulting in improvements to another existing cloth, yorisukiya.
Subsequently, attempts at using a tightly twisted weft thread were successful in creating sukiya chirimen, and a cloth called Akashi Chijimi was put on the market during the early 1890s.

Until the beginning of World War II, these cool crepes dominated the light-weight summer kimono cloth market. However, after the war, production gradually declined. Their weaving techniques, however, have become part of the continuing tradition of the cloths from Tokamachi and its followers still support them with devotion.

The fabric pattern of Toukamachi Akashi Chijimi is produced in exactly the same method as Tokamachi Ikat fabrics. The primary difference of Akashi Chijimi can be found it the twisting methods for its threads. First the threads are right twisted and then left twisted at 300 turns per meter before being gathered into bundles. The bundles of raw threads are then gently dyed, while a vegetable starch of 30% to 40% of the total thread volume is rubbed in by hand to ensure even dyeing. A traditional haccho nenshiki silk thread plying machine is then used to twist the threads at 3,000 to 3,500 twists per meter.