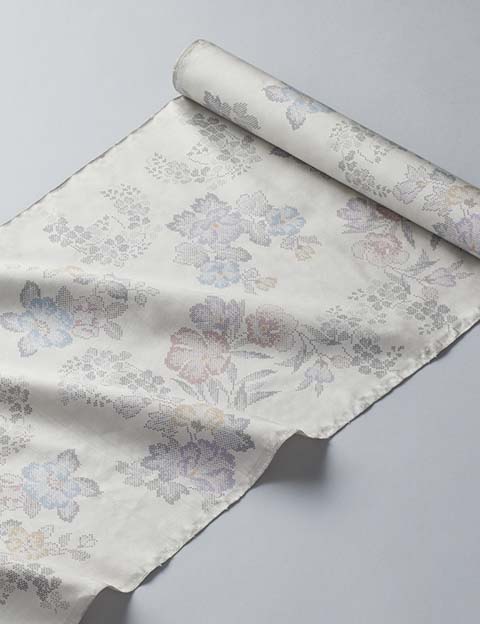 This fabric woven on the Amami Islands near Okinawa dates back to the 7th century. It was not until the beginning of the 18th century, however, that the craft became a full-fledged industry. Its techniques were subsequently handed on to working people in Kagoshima Prefecture.
The ikat or kasuri patterns are achieved on a special loom called a shimehata. Dyeing the yarn with the rhaphiolepis umbellata plant is also a famous part of the process. The origins of this fabric go back to the ikat weaves that originated in far-away India. When this technique spread through Sumatra, Java and on through the East Indies, it was also brought to the Amami Islands.

This distinctive, beautiful and intricately patterned cloth has a restrained character, being dyed with a colorant derived from a member of the rose family called sharinbai (rhaphiolepis umbellata) and mud. There are now 11,908 people engaged in Oshima Pongee work managed by 748 different companies. There are 141 government-recognized Master Craftsmen among these artisans.

This flexible, light, wrinkle-resistant and gentle fabric is born from the Amami Islands’ natural environment. It has a delicate yet vivid ikat pattern and a unique, austere touch created by using the rhaphiolepis umbellata plant for dyeing.

Oshima Pongee is woven after being dyed by the rhaphiolepis umbellata plant and mud with ikat techniques according to the design. The entire process takes from six months to a year.