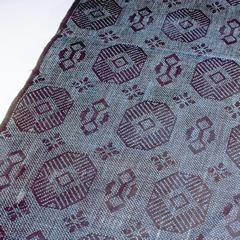 Four hundred years ago, a boat carrying Okinawan tributes was caught in a typhoon. A man who happened to be on board from Miyakojima, named Sugamayonin Shin'ei, heroically dived into the sea when the boat was about to sink and repaired the damage, saving the lives of all the crew. Recognizing his bravery, the King of the Ryukyu Kingdom made him a monk. In return, Shin'ei's wife was overjoyed and lovingly wove a piece of cloth to give to the king, which is said to be the origin of Miyako Jofu.

Miyako Jofu is a linen cloth, but with very fine threads and precise ikat patterns, the finished cloth is so smooth that it looks like it has been coated with wax. It has a wonderful cool, light texture and wears so well that it is said to last three generations.

Although Miyako Jofu is a fabric made of hemp, it has thin thread, refined patterns and smoothness that makes it looked waxed. It is superior in air permeability and also durable, famously lasting for three generations.

Miyako Jofu is made from a kind of flowering plant called ramie. Fibers are stripped from the plant and turned into threads. The threads are dyed by kasurijime (ikat dyeing) according to the prepared design. Miyako Jofu is dyed using Ryukyu indigo. It takes two or three months to complete weaving before the fabric is beaten and finished.