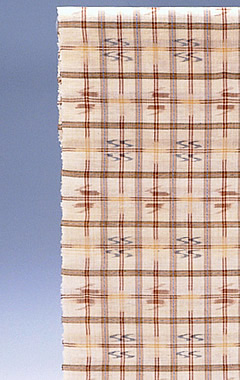 Satsuma was one of the old provinces occupying what is now the western part of Kagoshima Prefecture in the south of Kyushu. Forces from Satsuma invaded the Kingdom of Ryukyu in 1609 and the compulsory weaving of Yaeyama Jofu (to pay a poll tax that was levied) led to an improvement in techniques.
After the tax was abolished in 1907, a union was set up and the weaving of this fabric prospered as an industry. Weaving ceased for a time due to World War II, but was gradually revived after the conflict came to a close.

Using patterns common to other ikat weaves in Okinawa, the yarn is a hand spun ramie, or china grass. Being a hand-woven fabric, there are slight differences in color and pattern—no two pieces are the same. It has a light touch making it an ideal cloth for a summer kimonos. The main products created are kimono fabric, obi sashes, wall hangings and more.

Ryukyu kasuri, also common to other Okinawan clothing, are used for Yaeyama Jofu patterns. The fabric is made of hand-twisted ramie weft, dyed with plants and hand woven. This makes for subtle difference in every piece of clothing. The fabric is smooth and gives a cool impression, suitable for summer.

Ramie, which can only harvested a few times per year, is used for its material. The dyeing methods called tekukuri and nassen are well-known throughout Japan. It is said that Ishigakijima is the northern limit to use kuru for dying. Yaeyama Jofu is finished by soaking in seawater for up to five hours.