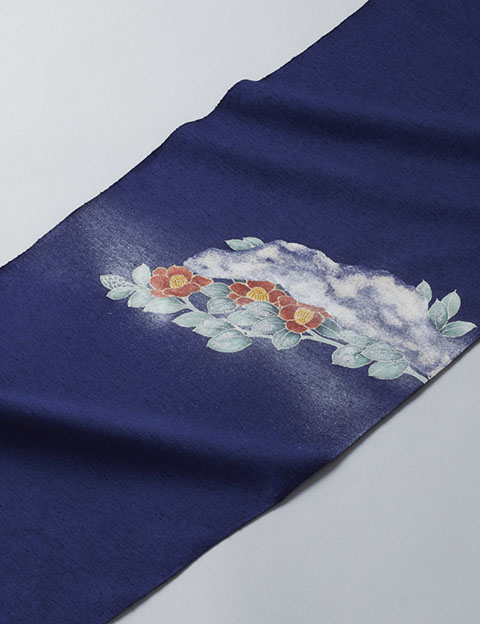 By the 18th century, Edo was the center of political power of the Shogunate, and the culture and economy of the modern-day Tokyo metropolis was flourishing.
Consequently, a great deal of produce found its way into the city, especially from western Japan. Many dyeing artisans accompanied their feudal lords and settled in Edo, bringing their own skills and techniques. Urban culture continued to develop as town folk from outside Edo developed more viable economic means. A chic yet restrained sense of taste became the norm as dyeing artisans established a new style of freehand dyeing.
The populous of the Edo metropolis had always been more inclined toward refined fashion. Founded on such stylistic standards, the coloring of Tokyo Tegaki Yuzen is restrained yet also characterized by a lightness and delicacy.

From the Edo period until today, Tokyo (formerly Edo) has always been the center of refined fashion in Japan. Tokyo Tegaki Yuzen exemplifies the refined character of Edo through sophisticated designs that use a limited number of colors. Tokyo Tegaki Yuzen conveys a fresh and cheerful feel in each design, within modest boundaries.

Tokyo Tegaki Yuzen consists of three major techniques: itome yuzen (framed drawing), rouketsu-zome (dye-resistant wax drawing), and musen-gaki (frameless drawing). Each of the techniques combines the concepts of drawing by hand with methods of fabric dyeing and creating dye resistance. Today, itome yuzen, which creates the impression of white threads floating upon a sea of vivid colors, is the most popular.