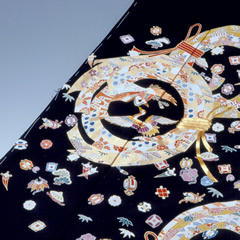 Although dyeing techniques had existed since the 8th century, it is said that the yuzen technique of painting dye directly onto cloth was established by Miyazaki Yuzensai, a popular fan painter living in Kyoto toward the end of the 17th century. He introduced his own style of painting as a way of rendering patterns. This led to the birth of the hand-painted Kyoto Yuzen Dyeing technique.

A multicolored yuzen used to apply artistic designs to kimono cloths grew in popularity from the middle of the 18th century as merchant culture flourished. In the Meiji era (1868-1912), utsushi yuzen was developed using stencils to create these distinctive designs.

It would not be an exaggeration to say that Kyoto Yuzen, with its rich variety of motifs drawn from nature, has become synonymous with the Japanese kimono. Despite an extensive use of color, there is a special aesthetic quality within the noble designs that has been nurtured throughout Kyoto’s over thousand-year history.

It’s not an exaggeration to say that Kyoto Yuzen designs depicting flowers, birds and landscapes have become synonymous with the Japanese kimono. Noble and graceful while employing a multitude of colors, Kyoto Yuzen color patterns beautifully bring to life Kyoto’s history of over a thousand years.

Kyoto Yuzen involves hand-painting or stencil-dyeing patterns on pure silk through as many as 14 required stages, based on a distinct division of labor. Kyoto Yuzen designs employ a multitude of patterns and colors, and the techniques are divided into two large categories of tegaki yuzen (hand painting) and kata yuzen (stencil dyeing). Techniques can be further classified into those that came from Japan and those introduced from abroad.