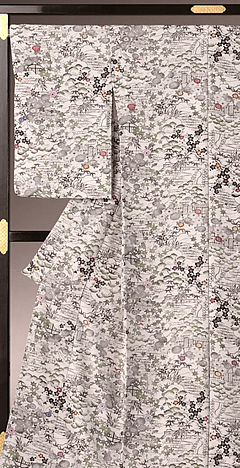 Kyo Komon dates back more than 1,200 years, when its essential stencil papers were first made.
After the Onin War which occurred during the Muromachi era (1333-1568), many different kinds of silk fabric were produced. This led to the development of two forms of stencil dyeing around the area of Horikawa in Kyoto, which became a dyeing center—tsujigahana and chaya zome. Fine-pattern dyeing can be found on a number of important garments, including a coat belonging to Uesugi Kenshin bearing his family crest, and a waistcoat worn by Tokugawa Ieyasu, also bearing his family crest. Around this time, rice-paste resist techniques were also perfected.

This form of fine-pattern dyeing was a method of stencil dyeing small patterns in a single color on garments including the kamishimo, a ceremonial robe worn by warrior classes. These fine patterns are still dyed using stencil papers today, but bolder Western floral patterns have now been added to their repertoire. The fabric is mainly produced for kimonos and coats.

Komon (“small pattern” in Japanese) are fine patterns stencil-dyed in single colors like those found on a samurai’s kamishimo. These days, in addition to the traditional komon (fine stencil-dyed patterns) there are many other types, including boldly stylized patterns with gaudy flowers, etc.

Refined white cloth is steamed and smoothed before being pasted onto a yuzen board with toro glue applied on one side. Resist printing paste or color paste is then applied with a special square spatula (komabera) from the top of the paper stencil, and the patterns are reproduced onto the fabric. Finally, the fabric is subjected to texture dyeing or brush dyeing to color the background before being steamed and washed.