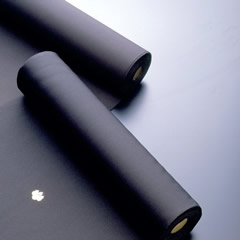 Although dyeing cloth black has a very long history dating back to the 10th century, it was not until the 17th century that it became established in Japan as a recognized craft including family crests.

In the middle of the Edo era (1600-1868), binrouji zome, which used indigo and other dyes to pre-dye the cloth, dominated this craft, which became a favorite with the warrior classes. Then at the beginning of the Meiji era (1868-1912), its application spread widely due to the fact that haori, the short black overcoat kimono emblazoned with family crests on the back, came into more general use on formal occasions. Gradually, with the introduction of dyeing techniques learned from the British and research done on dye in France and Germany, the rather laborious binrouji zome technique was dropped and present-day vat dyeing techniques became firmly established, along with two others, sando kuro and kuro senryu.

Silk is used, and in order to perfect the depth and subtle tone of the black color, the cloth is pre-dyed with crimson or indigo using chemical dyes. Applying the family crest is either painted by hand or with a stencil. Material for neckties and arm bands is produced alongside fabric for kimonos and traditional haori worn on formal occasions.

The fabric used for these items is silk. Even when using chemical dyes, preliminary dyeing with crimson or indigo is necessary in order to bring out the depth and subtlety of the color black. As for the coat of arms, this can either be hand-drawn or printed using a paper stencil.

White fabric is stretched over a wooden frame and then tentered by steaming it. Next, with the fabric still left untouched (to no stain the part where the coat of arms will be placed) resist printing paste is applied for resist printing. Only then the fabric receives hikizome (brush-dye) or shinsen (dip-dye) treatment. In shinsen (dip-dye), the fabric is immersed in black dye after being preliminarily dyed crimson or indigo. Hikizome (brush-dye) is a dyeing technique that applies black dye with a brush after the fabric has been preliminarily dyed crimson or indigo. The sando guro (triple black) dyeing process consists of applying vegetable dyes and mordant dyes more than two times each. The coat of arms is drawn at the very end of the process.