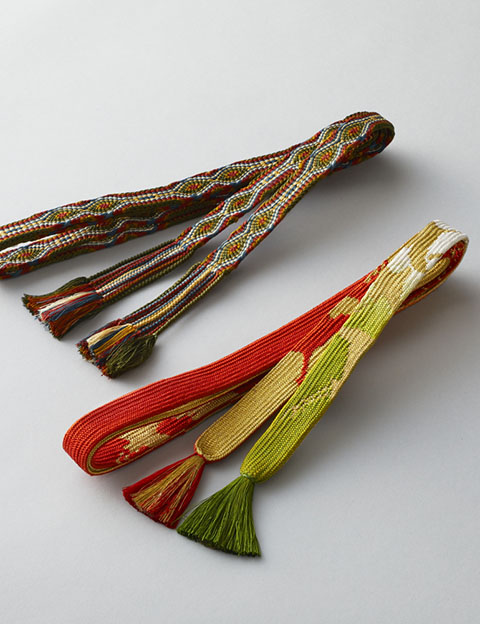 Iga Kumihimo Braiding has ancient origins, perhaps dating back to before the Nara era (710-794).
During the Heian era (794-1185) highly elaborate flat braids and cords associated with Buddhist and Shinto paraphernalia came into use. With the ascendancy of the warrior class, many braids were produced for use with armor and swords. This gave rise to the establishment of a braid culture centered on weaponry. Yet when the carrying of swords was officially outlawed and society was no longer founded on the samurai class, the time-honored techniques of braid work from the Edo era (1600-1868) were still close at hand in the form of accessory braids in formal and traditional dress.

Intricately braiding beautifully dyed silk threads to produce braids with a singular texture and quality, the ancient techniques of Iga Kumihimo live on as an integral part of life in modern Japan. They are still specifically used to tie obi and the traditional over-jacket called a haori.

Beautifully dyed silk threads are interwoven to create the unique texture and experience of Iga Kumihimo Braiding. The techniques used have been passed down since ancient times.

The threads are placed on a scale, and the number of threads required to make a decorative cord to hold an obi sash in place, for example, is measured by weight. The threads are dyed to faithfully correspond with color samples for each design. The threads are wound onto a frame called a keishaku-waku. The circumference of the frame is approximately 150 cm, and the length of a single kimono sash cord is approximately 250 cm, so this is how the number of sashes to be made is measured. A haccho spins the thread, and disks called kakudai (for braiding upwards), marudai (for braiding downwards), ayadakedai (for braiding flat) and takadai (for high grade cord) are used to braid the cord.