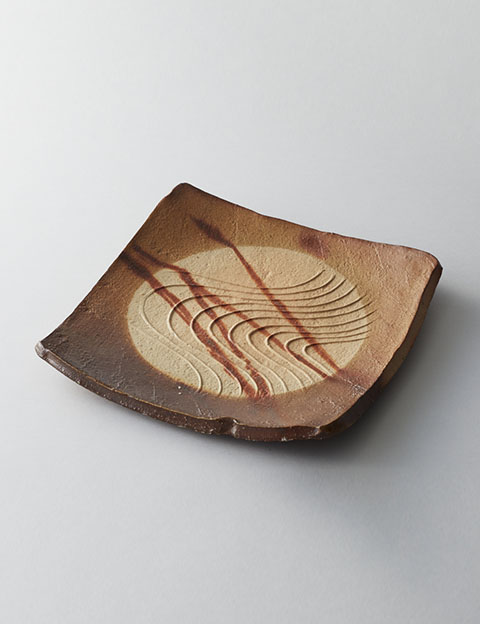 Bizen is one of Japan's six oldest kilns with a history going back some 1,000 years to the Heian era (794-1185), when these wares were already in production.
At the end of the Muromachi era (1392-1573), the rustic, undecorated qualities of these wares was particularly popular among tea ceremony aficionados, resulting in the production of many tea bowls and other tea ceremony implements. Bizen Yaki became more widely known, with the protection from the local clan, in the mid-18th century. Bizen Wares have thrived ever since, and a number of Bizen potters including Kanashige Toyo, Fujiwara Kei and Yamamoto Toshu were officially recognized as Living National Treasures in the early Showa era (1926-1989).

Bizen Wares have many attributes. Their natural look and warmth are expressive of the earth from which they are created. Bizen Wares can be used in many ways. The delicate flavors of sake are not lost when stored in a Bizen flask, and flowers in a Bizen vase last three times longer, while water stored in one remains fresh for longer. But what is really special about Bizen Yaki is the happy accidents which occur during firing. In a sense they are “natural art,” as no two pieces of Bizen Yaki are the same. The accidents that occur during firing often produce unexpected changes in color and textural effects on the surface.

Bizen Wares have a rustic and solemn style, warm sheen and ease of use. However, their most distinctive feature may be the imperfections and color variations (called yohen) that take place during firing. These variations, occurring naturally and producing changes in the color and surface of the pottery, make Bizen Yaki natural works of art, and no two pieces are exactly the same.

Bizen Yaki is baked without being glazed or painted. Red pine is burnt to create a temperature of about 1230°C in ascending kilns for firing. The wood is burnt for about two weeks before and after the process, although the exact length of time depends on the size of the kiln. The surface changes that take place during this time due to the combined effects of heat, flames and ash make up the yohen imperfections mentioned above.