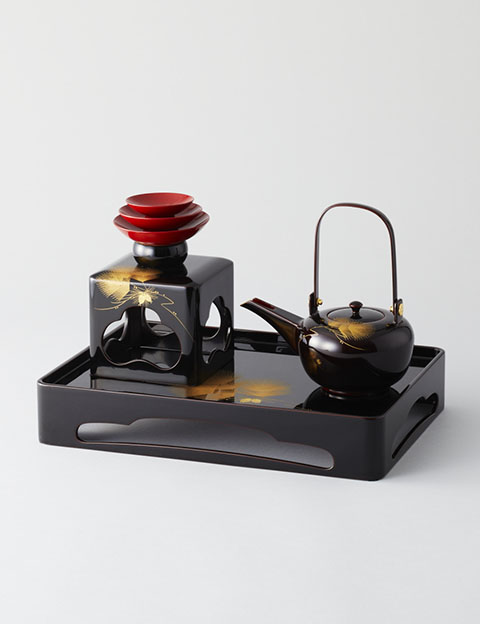 Aizu lacquerware was made possible by the planting of lacquer trees, an act promoted by a powerful local family during the Muromachi era (1392-1573). Then, when Gamo Ujisato arrived from what is now Shiga Prefecture to lead the Aizu clan during the Momoyama era (1573-1600), he brought with him skilled lacquerers. With the dissemination of their skills and the development of lacquer techniques, Aizu soon became a production center for all kinds of lacquerware.
Later, specialist maki-e artisans were brought in from Kyoto to aid the further development of the lacquerware operation, resulting in the Shogunate granting special permission to export Aizu-nuri in the middle of the Edo era (1600-1868). Production suffered at the start of the Meiji Restoration in 1868, but soon returned to normal before entering a golden age.

Aizu-nuri’s appeal lies in its use of various techniques as well as decorations featuring auspicious motifs favored by the Japanese. Several techniques are of particular note. Tetsusabi-nuri consists of tasteful motifs drawn in a rusty brown. Kinmushikui-nuri involves sprinkling rice husks over the wet surface of a piece to create a pattern. Kijiro-nuri allows the beauty of the woodgrain to shine through. Each technique is expertly used to produce bowls, traditional stacking boxes, coasters and trays.

The prominent features of Aizu-nuri lacquerware include designs such as symbols of good fortune, which are well loved by the Japanese. These designs include tasteful rusty brown pictures drawn using the Tetsusabi-nuri technique, unique patterns created scattering rice husks using the Kinmushikui-nuri technique and simply allowing the beauty of the underlying woodgrain to show through using the Kijiro-nuri technique.

Aizu Lacquerware is created through the primary production processes of preparing the base wood shape, applying an initial coat, applying the final coat and finally, decorating the piece. During these processes, individual tasks are split up according to the shape of the piece (round or flat) and the operations required.