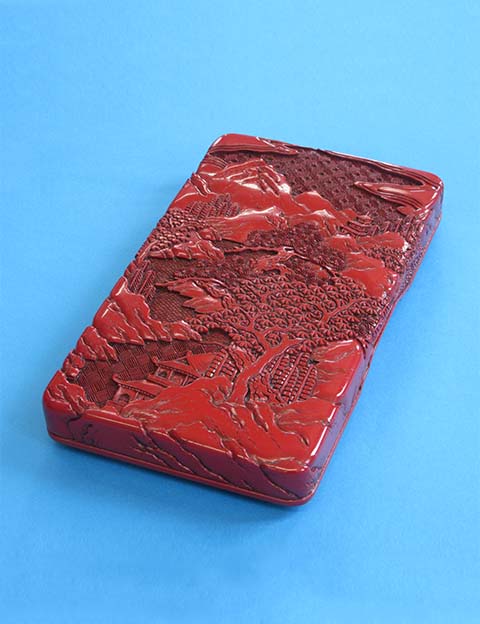 The Murakami area of Niigata Prefecture has been known for its natural lacquer since the Heian era (794-1185). Dating back to the early 15th century, Murakami lacquered wood carvings have made use of this local sap.
Lacquerers in Kyoto learned to imitate the multi-layered carved lacquerware from China, achieving the same effect by carving a wooden core and coating it with natural lacquer. The technique was adopted in Murakami when a temple was built in the area. A carpenter involved in the construction of the temple mastered the techniques and passed them on. During the Edo era (1600-1868), this distinctive craft was taken up first by lower-ranking samurai, and then by local villagers.

The fine detailed carvings are enhanced by the application of lacquer using six distinct techniques, and the most characteristic uses a matte vermilion lacquer for a dignified, composed feel.

Murakami kibori tsuishu is unique for its intricate engravings and the use of a lacquering method that enhances the beauty of the carvings. The method comprises six main techniques, including tsuishu (layered red lacquering), tsuikoku (layered black lacquering) and Shudamari-nuri (thick red lacquering). Tsuishu involves layering red lacquer to produce a subdued, matte finish that restrains the lacquer’s natural gloss.

The process involves three different artisans. The first carves the shape from magnolia or horse-chestnut wood, the second draws a sketch of the design on the wood and engraves it and the third lacquers the wood using only pure, natural lacquer. The lacquering stage consists of 18 to 20 individual steps, and before the piece is finished, it will be further engraved with delicate, hairline designs.