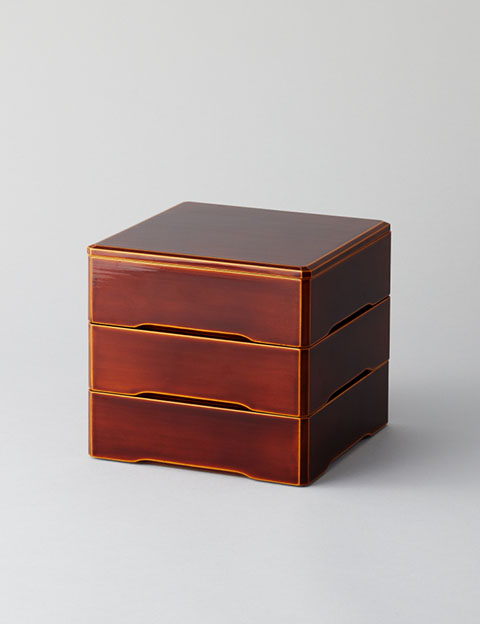 The techniques used to produce Hida Shunkei lacquerware were discovered by chance. At the beginning of the 17th century, a carpenter working on temples and shrines in the town of Takayama was surprised to find that peeling a piece of sawara cypress produced an interesting textural effect. He used the wood to make a tray and then lightly lacquered the surfaces.
The coloring of the tray resembled the hi-shunkei, a well-known tea ceremony tea jar made by the potter Kato Kagemasa, and thus the name shunkei was adopted for this unusual style of lacquerware.

Hida Shunkei lacquerware is produced by skillfully bending the wood into shape or by assembling many thin boards together. But what makes the style unique is the way in which the beauty of the wood itself is brought to light by the application of a transparent lacquer produced from raw natural lacquer using a special method. Items produced today include household articles such as trays, assorted boxes, tea ceremony items and small tables.

The technique of creating three-dimensional products from flat pieces of wood is a characteristic of this craft and is used to create a variety of items. The transparent coating of Hida Shunkei lacquerware allows the beauty of the underlying woodgrain to shine through.

To prevent warping, the wood is allowed to completely dry before forming. Natural lacquer is processed using a unique method to create a clear lacquer called suki-urushi, which is used to finish the pieces.