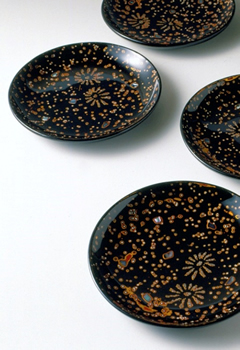 The making of Wakasa Nuri began at the beginning of the Edo period (1600-1868), when lacquerers of the Obama clan near Wakasa Bay started decorating their work with designs depicting elements of the ocean floor, having got the idea from techniques used in Chinese lacquer ware.
A technique called Kikujin-nuri was the result of repeated improvements which were made. Then apprentices of the craftsmen who had originally developed this technique came up with a variant they called Isokusa-nuri. In the middle of the 17th century, a method, which is still used to this day, was perfected for applying decoration using eggshell and gold or silver leaf. The feudal lord at the time called it Wakasa Nuri and because he encouraged lower ranking warriors of the Obama clan to take up the craft as an occupation, various refined and beautiful designs were devised.

The marine elements are depicted using such things as eggshell, mother-of-pearl, pine needles, Japanese cypress needles and rape seed. Added to this, gold leaf glitters among them like stars or jewels and being an almost exclusively hand-made craft, no two objects are ever the same. Chopsticks, cups and flasks for sake, tea items, vases and boxes all benefit from these engaging marine scenes of a craft.

In Wakasa Nuri, special decorative motifs representing the depths of the ocean are created using egg shells, limpet shells, pine leaves, cypress leaves, rapeseed, etc. They are embellished with glittering gold leaf reminiscent of the light of stars or jewels. Since they are hand-made, no two are the same.

After blue, yellow and red lacquer studded with limpet shells and egg shells is applied in layers, gold leaf is added and choice lacquer is layered on repeatedly; next comes polishing by whetstone and a special kind of charcoal to give the works a glossy finish; the process is then completed by applying a top coat to the plain parts. Since they are made over the course of a whole year, these exclusive lacquerwares possess a sturdy elegance which is unaffected by heat or humidity.