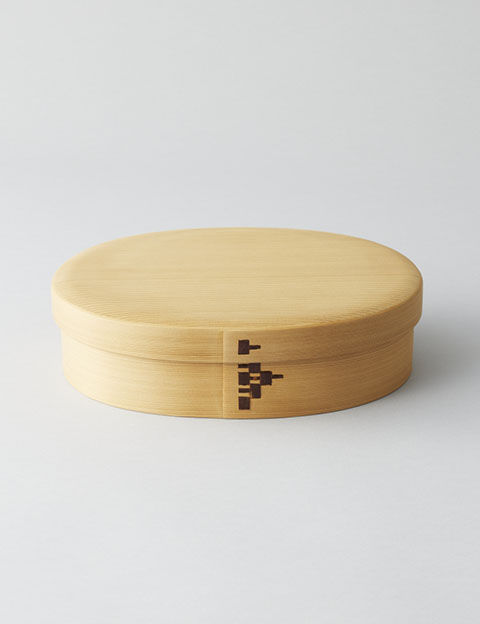 Satake Yoshinobu was a military commander who fought with Toyotomi Hideyoshi at the battle of Sekigahara in 1600. Hideyoshi was vanquished and Satake was ordered by the Tokugawa Shogunate to move from his former domain of Mito to Akita in the far northern reaches of Honshu. When he arrived, he discovered that the people there were very poor and some did not even have enough to eat. As lords of Odate castle, the western branch of the Satake family set about trying to relieve the poverty of the people by using the abundant local supplies of timber.
First, low-ranking warriors were ordered to make bentwood goods on a part-time basis. Then, instead of paying their annual tribute in rice, the people were made to fetch the wood required for this bentwood work from the surrounding mountains. Soon, there were enough products to sell in such places as Sakata, Niigata and far-off Edo.

The craft takes full advantage of the local cedar trees, which produce a highly flexible wood with a fine grain and appealing scent. Embodying the concept of “simple is beautiful,” the light, fine-grade timber with its fresh red and pale yellow hues is used to produce beautiful rice tubs, water jugs, trays, bento boxes and even coffee cups and beer tankards.

Akita cedar is first peeled either by hand or with a saw mill, and the peeled wood is placed in hot water. Once the wood has softened, it is taken from the water and wrapped around a roller to curve it. The overlapping wood is then fastened, and the piece is allowed to dry naturally. After the wood has dried, overlapping flaps are fastened with glue, fastening holes are opened and cherry bark is used to sew the pieces together. The lid and bottom are then inserted and glued to finish the product.