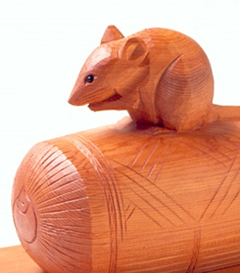 Ichii woodcarving developed from humble beginnings, when a woodcarver named Matsuda Sukenaga used a yew tree from the Hida mountains to make some netsuke ornaments, which he left uncolored, simply allowing of the beautiful grain of the wood to shine through. Since then, this style has remained representative of the Hida region’s woodcarving craft.

Making full use of the wood’s qualities, the skilled woodcarvers produce small ornaments representing the Buddha, animals and more, all with careful attention to detail. Pieces carved from a single tree are particularly impressive, but all items, including masks, figures of people and animals, as well as tea ceremony items will delight their owners year after year if treated with the respect these pieces deserve.

Ichii woodcarvings are left unpainted to allow the natural beauty of the wood to shine through. Skilled woodcarvers use hammers and chisels to fashion figures of the Buddha, animals and more. Small sculptures carved from a single block of wood are particularly impressive.

First, the Japanese yew wood is dried. The grain, the white sapwood on the outer rings, the red heartwood in the center and the shape of the final product are all taken into consideration when cutting a piece of wood. Carving is performed with hand tools, including saws and chisels. The pieces are finished with chisel marks remaining on the surface and without any additional color coating.