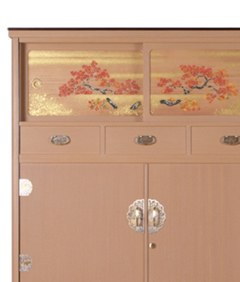 It seems likely Nagoya paulownia chests were first produced by craftsmen who came to Nagoya in the early 17th century to help build Nagoya castle. After the castle was completed, the craftsmen settled in the city and began making chests and chests of drawers.
After the country was unified under the Tokugawa Shogunate, the economy stabilized and life become peaceful. As a result, the production of cloth increased and even commoners began to dress in nicer clothes. This led to the need for an easy-to-use way of storing fine clothes. The development of Nagoya paulownia chests was further facilitated by the abundant supply of timber in nearby Hida.

Compared with similar chests produced elsewhere in Japan, Nagoya paulownia chests are about 20 cm wider, and the stair-like nobori-tansu have a small drawer on the bottom right side. Some chests are extraordinarily elaborate, with gold- or silver-colored fittings, a gold leaf design on one of the doors and natural lacquer maki-e decorations.

Nagoya paulownia chests are approximately 20 cm wider than similar chests from other parts of Japan, and have a small drawer on their lower right side. Metal fittings are colored gold or silver, and the fukuroto sliding door often has gold leaf or lacquer designs painted on it. These are but a few examples of this luxurious craft.

The manufacturing process comprises the following steps: forming the lumber, converting the timber, processing, ornamentation, and attaching the fittings. Over 130 steps are completed by a single craftsman. Solid paulownia wood is joined using traditional box-joint techniques, polished with an uzukuri broomcorn scrubber, painted with a mixture of polishing powder and alnus firma liquid and finally polished with wax.