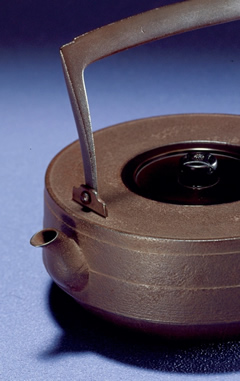 In the middle of the Heian era (794-1185), Minamoto Yoriyoshi fought a number of battles in Yamagata in an effort to quell various uprisings. His army included metal casters who discovered that the sand in the city’s river and the soil in what is now Chitose Park were ideal for casting. Some of these casters later settled in the area and became the founders of the Yamagata metal casting tradition.

Chagama, the pots used to boil water for the tea ceremony, are produced in Yamagata. These light, perfectly shaped pots are the result of expertly applied techniques, which are also used in the production of ornaments, bronze vases and iron kettles and cooking pots.

Many of the cast-iron pots used to boil water for the tea ceremony are produced in Yamagata Prefecture. The precise shape and delicate finish of ornaments, kettles and pots made from iron and copper are characteristic of the Yamagata metal casting craft.

First, the overall design is decided, and the cast that will form the outer shape is made from local materials, including sand and pebbles. Japanese washi paper is used to make a stencil of the design, which is drawn onto the cast and carved. Next, the inner cast is set within the outer cast, and molten iron is poured inside. After the iron has set, the cast is opened, the metal is removed, the surface is tempered and colored lacquer is applied.