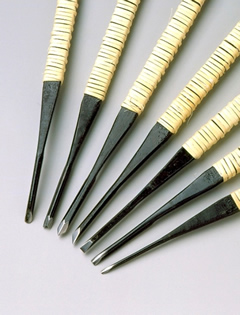 The making of Echigo Yoita forged blades dates back to the Sengoku era (1428-1573) when swordsmiths from Kasugayama arrived in the area and began forging various kinds of blades for the warring feudal lords.
In the middle of the Edo era (1600-1868), carpentry tools from Yoita became known as Tohi-nomi and Hyobu-nomi. At the start of the Meiji era (1868-1912), swordsmiths turned their focus toward making carpentry planes, which soon became famous nationwide.

Echigo Yoita forged blades are produced using skills and techniques that date back more than 400 years. They are known for their sharpness and reliability, and come in a variety of forms, including chisels, planes, axes, adzes, carving tools, knives and shaving trowels (yarikanna).

Echigo Yoita forged blades are characterized by their incredibly sharp edges and ease of use, which are the result of the craft’s unique forging process.

First, steel and iron ferrite are stretched to the specified dimensions. The steel is placed upon the iron, and the combination is hammered until they glow bright red. Then, the metal is slowly heated on the forge to ensure the strength of the alloy. Next, the blade is polished to bring out the natural beauty of the metal before being repeatedly tempered and quenched, a process which is considered essential for forged metal. Finally, the edge of the blade is ground and set in a handle or base.