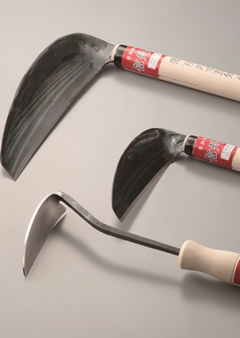 The origins of Shinshu forged blades date back to the second half of the 16th century, when the battles of Kawanakajima were raging. During this time, swordsmiths and other artisans came to the area to make and repair weapons and passed on their skills to the local people.
During the first half of the 19th century, a skilled sickle maker developed two new forms of this useful tool, and another smith made improvements to the two-edged sickle, transforming it into a lighter, singled-bladed tool. The tools these two men developed became the prototypes for Shinshu forged blades, which are still being produced today.

The strength of these bladed tools is the result of being beaten into shape after forging. A particular feature of the sickles is the width of the blade. Cut grass falls conveniently into the hand, even when the handle is level, because of the unique angle of the blade. Today, a wide range of sickles, knives and straight-blade hatches are produced to meet the nationwide demand.

Shinshu hand scythes and knives derive their incredible strength from being hammered into shape after the metal is forged. These tools are characterized by their wide blade and the angle of the blade relative to the handle, which allows grass to fall conveniently into the hand even if cut while the blade is held level.

The steel is heated in a forge and hammered to create the shape of the blade. During the hammering process, the scythe blades are given a single edge, the unique angle of which allows for convenient cutting. Similarly, hatchet blades are given a single edge as well as a long, narrow groove. In the tempering process, the blade is coated in a special clay and rapidly cooled. Finally, the edge is ground and the blade is polished by hand.