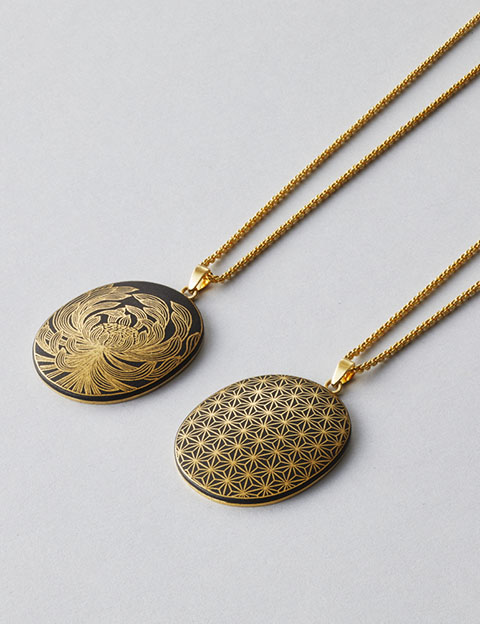 The Higo inlay craft can be traced to the craftsman Hayashi Matashichi. Supported by the local feudal lord, Hayashi performed inlay metalwork on firearms and sword guards during the first half of the 17th century. His style of sword guard continued to be produced by generation after generation of the Hayashi family and was later taken up by other families, including the Hiratas, Nishigakis, Shimizus and Kamiyoshis, on through to the Edo era (1600-1868). In fact, many examples of their work remain in existence today. When the carrying of swords was outlawed in 1876, the Higo craftsmen turned their focus to decorative work and began making everyday items in line with the new social norms.

Higo inlay is produced by cutting channels into iron with a graver or cold chisel and laying gold or silver into the channels. Other techniques may be used to produce other forms of inlay in relief. No matter the case, the designs are characterized by their dignity and restraint. Their quality is further heightened by the contrast of gold and silver set against the dark background.

In addition to sword guards, which are still made to the same high standard as in days past, more modern items, including cigarette cases, brooches and accessories, are also produced today.

Higo inlays are known for the profound and austere feelings they evoke. They are created by carving a design into an iron base, laying gold or silver in the carved-out parts and striking it. The gold and silver set against the black background gives the piece an air of dignity.

First, grooves are carved into the base material to create the design. Then, the gold or silver plate is fitted by striking it with the horn of a deer and a finishing carving is performed. Next, a trade-secret corrosive liquid is applied to rust the surface, after which the plate is boiled in tea. This darkens the surface and prevents further rust.