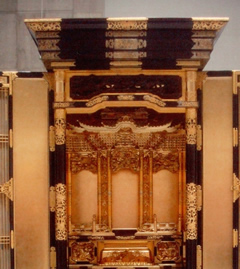 By the middle of the Edo era (1600-1868), the number of people traveling from Yamagata to Kyoto and back had increased because of trade between to two areas. As a result, Buddhist altar culture was introduced to Yamagata.
Local craftsmen made the journey to Edo (Tokyo) to study carving techniques and upon returning, they began producing transoms, articles related to Buddhism and more. Subsequently, metalworkers, lacquerers and maki-e artisans began producing Buddhist altars for homes.

The outer facades of the altar are of made from zelkovav or sen wood, and are lacquered to bring out their grain and give them sense a warmth. The kuden, or inner sanctuary, with its bracket assemblies, has a heart-warming beauty. The grand fittings are inlaid with arabesque patterns, and the carvings of dragons and heavenly beings have a brilliant splendor.

The surface of Yamagata household altars are made with woodgrain boards of Japanese zelkova and castor-aralia, which are lacquered using the mokumedashita-nuri technique to accentuate the natural woodgrain and express a sense of warmth. The cross-lap wood-joining technique used to assemble the inner palace (kuden) creates a striking beauty that pierces the heart. The gold-inlaid metal finishings (kanagu) are coated with black lacquer in a paisley pattern, creating a sense of calm grandeur. The scrolled dragons and celestial maiden carvings create a further sense of brilliant elegance.

The production of a Yamagata household altar comprises seven steps. First, the wooden base is made, followed by the kuden palace, the engravings, and the kanagu metal finishings, all according to the design. The frame is temporarily assembled for adjustment, and then disassembled for lacquering, painting with maki-e gold dust, application of gold leaf, and setting of the metal finishings, before being reassembled.